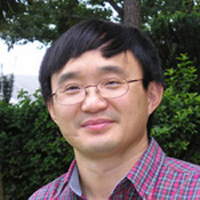 Our laboratory has been studying the role of environmental agents that include pesticides, heavy metals and infectious agents in the development of neurological disorders including Parkinson’s disease, a degenerative movement disorder resulted from a progressive destruction of the nigrostriatal dopamine-releasing neurons in the midbrain. We are particularly interested in delineating the intricate interactions between the immune cells in the brain (microglia and astrocytes) and the affected neurons in response to environmental agents. Aberrant activation of glial cells, induced through interactions with environmental agents or in response to neuronal injuries can lead to the excessive production and accumulation of reactive oxygen and nitrogen species, proinflammatory cytokines and lipid mediators that contribute to the progressive neurodegenerative process. We are utilizing molecular, biochemical, cellular and whole animal approaches to decipher the various aspects of the neuroinflammation-mediated neurodegeneration. Our ultimate goal is to identify highly specific molecular mediators of neurodegeneration as potential therapeutic targets and/or diagnostic biomarkers.

We are saddened by the death of Dr. Linda Spear, a past keynote speaker at our Annual Symposium in 2015. Her impact on science and as a mentor will be […]